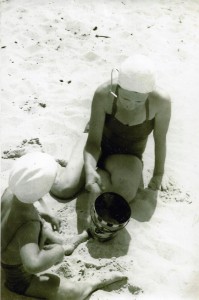 I grew up in Kansas, far, far from the ocean.  My mother, however, filled our home with reminders of the seashore—conch shell bookends, seascape murals and the scent of gardenia and plumeria which she wore year-round.  Sometimes she would direct our attention to the waving wheat field beyond our back yard and talk about the tides and the cadence of the sea.

I’m the oldest of five children, two girls and three boys.  When our family became too large to “camp out” in our station wagon, we began alternating vacation times.  The girls would go one summer, and the boys the next, always to the beach.  The closest ocean was 800 miles away in Galveston, Texas.  Occasionally, we would venture elsewhere, to New Orleans, or even to Lake Michigan, where we once took a cruise.

During the summer of my sixth grade year, we moved to Texas and closer to the coast.  Still, it was a long drive to the ocean.  The near-by lakes became our most frequented shore as we learned to water ski, snorkel and fish.  My memory is replete with mother-daughter talks while both of us tread water, drifted in a metal rowboat or sunned on a sand bar.  It was there, atop a towel that I read and reread Anne Morrow Lindbergh’s Gift from the Sea a favorite of my mother’s.

Years later when I was newly married, my Air Force husband and I were stationed in Charleston, S. Carolina.   I lived only minutes from the seashore, but, oddly, I seldom went.  I guess it was enough just knowing the sea was there, nearby.  I was young and my days were full with two babies in the house.  Besides, the call of the sea still sounded like my mother’s voice.  I had yet to hear its siren song for myself.

My husband and I eventually returned to Texas to raise our family, and our vacations often took us to the beach.  Our children loved the new water sports of parasailing, scuba diving and jet skiing.  One Christmas, we gave ourselves a family trip to Hawaii.  Years later we had access to a beach house in California through my husband’s employer.  We went infrequently, but I always kept the house key in my purse as a reminder of my place by the sea.

Over the last thirty years, I’ve traveled to six continents.  I’m often asked, “What is your favorite place?”  And, I find myself, more often than not, describing a seaside town, an unspoiled beach or a city by a bay.

I live with mementos of my travels all around me.  Photographs paper my walls.  Baskets and jars of shells adorn my bathroom.  Travel books fill every bookcase in my house.  I frequently discover a forgotten seashell in a jacket pocket, and sand from somewhere lines the dresser drawer where I store my swimsuits.  Even opening one special linen cabinet can give me pause when I smell coconut oil on a terrycloth beach towel, and remember.

I feel at home whenever and wherever I smell a salty breeze or hear the movement of water.  The taste of crab and the sight of a lighthouse can send me to my comfort zone almost instantaneously.  I can experience tranquility whether or not I’m actually gazing at the sea, which most of the time is not possible from my north Texas home.  It’s a part of me.

I hear the call of the sea because I carry its nature with me wherever I go.  It’s been said that the difference between a tourist and a traveler is that the latter stops thinking in terms of “back home.”  But rather, a traveler takes “home” with her.  The call of the sea allows me to journey through life as a traveler.

Just as my mother shared her nature and traditions with me, I want to pass those rituals on to my children.  What better place to do it than in Galveston?

Read More About the Book
©2012 All rights reserved. Janice Byrd and janicebyrd.com.