I love historical stories (WWII) that show the courage and character of flawed people who do something beyond their self interest, sacrificing their own desires for the sake of a greater cause. Just when Rick has been reunited with the love of his life Ilsa, and personal happiness seems possible, Rick decides to send Ilsa away to safety and stay behind in Morocco to help in the French Resistance.

Based on the true story of Augusto and Michaela Odone, who when faced with their son’s rare terminal illness, determine to find a treatment. Their marriage, faith, and conventional medicine are put to the test, especially when they realize that all of their efforts will be too late to help their son, but will be for the benefit of someone else’s child.

Karen Blixen (Isak Dinesen) tells her amazing story of living in Kenya during the first world war. Karen falls in love with the African people as she desperately tries to save her coffee plantation. When threatened with the loss of her land and the one she loves, Karen says, “Some things are worth having, but they come with a price.” I have been to Kenya several times and visited Karen’s home there. This movie brings to mind both the beauty and the brutality that is simultaneously Africa.

Although I’m not much of a sports fan, sports movies have an appeal to me because they are often metaphors of life, the struggles we endure as a community (team), and the decisions we inevitably face alone to choose right or wrong. This true story of Jim Morris, the oldest major league baseball rookie ever inspires me to never give up on my dreams.

A young single mom immigrates to California with her daughter and finds work as a maid in the wealthy home of a very dysfunctional wealthy family. Told thru the eyes of the daughter as she tells her story to a university admissions director, this story speaks not only of a mother’s fight for the soul of her child, but of the value of a parent’s example in the face of rejection and ridicule. 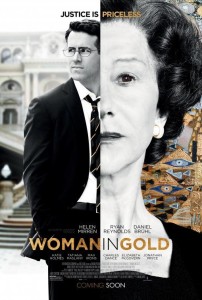 Maria Altman sought to regain a world famous painting of her aunt plundered by the Nazis during World War II. She did so not just to regain what was rightfully hers, but also to obtain some measure of justice for the death, destruction, and massive art theft perpetrated by the Nazis.

Read More About the Book